Attended the food festival in Tachikawa

Japan is obsessed with food and that's a good thing because I'm obsessed with food. Living here definitely spoils you with food offerings that other countries just cannot match. From the food halls in department stores to street food, high-end to low-end, we really have it all.

We also have numerous food festivals that are held throughout the year and I just so happened to visit one yesterday. This particular one called Manpaku, took place in Tachikawa city which is just a short 25-minute train ride away from Tokyo. I've been to Tachikawa a few times but mostly because they have one of the most amazing parks I've been to as well as a huge Ikea ( but aren't they all huge?) store. The city itself is kind of fun to walk around and includes a few major department stores to satisfy any shopaholic.

Anyway on to Manpuku, the reason why I came to this place in the first place. The first thing I noticed when I arrived was the huge line snaking it's way to the entrance gates. But looks can be deceiving and with Japanese efficiency, the line moved quickly. I had been looking forward to this for weeks and I had high expectations. My taste buds were ready to be wowed.

Surpringly once inside, the place wasn't all that crowded probably due to the fact that they charge an 800 Yen  ($8.00US) admission for the previlege of paying for eating food from plastic plates. Not only that, the offerings weren't particularly impressive. Hmm, I had to wonder if I had wasted my time coming here.
Anyway I decided that I might as well enjoy it for what it is and perused the vendors on display. After one quick walk around, I knew what I was going to try. 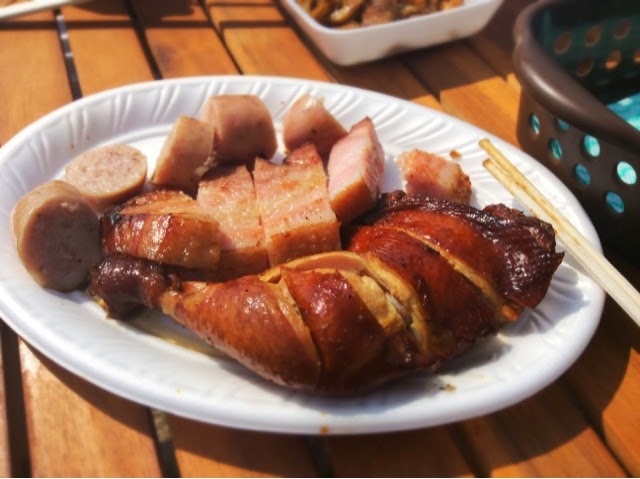 I decided to start my feast with a plate of smoked meat, which was actually a bargain. It consisted of a thick slab of bacon, a juicy sausage and a chicken leg. My mouth was literally dripping with saliva before I took my first bite of this plate fit for a carnivore. I have to say the bacon and sausage was rather underwhelming and the chicken probably was the best out of the three. The meat had a pleasant smoky flavor, but nothing else. I almost wished I had brought my own barbecue sauce as I knew that would have taken up the flavor a few notches up. 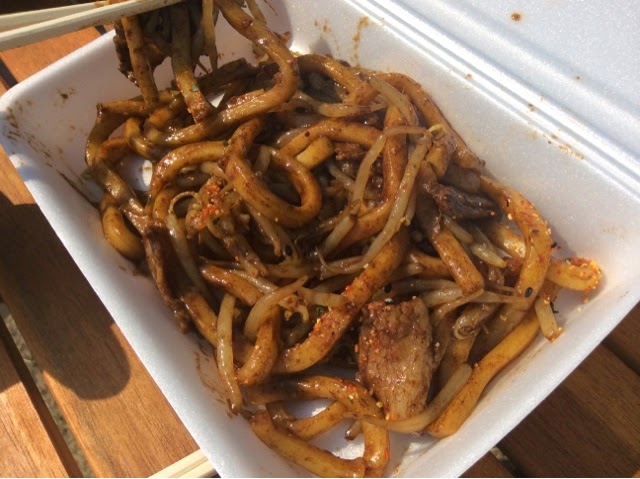 Next up was a plate of noodles which was actually much better than the meat plate but at ¥650 for a tiny serving, it was a bit over-priced. You see the styrofoam container with the noodles above? The photo of the half-filled container was taken before I even took a bite. 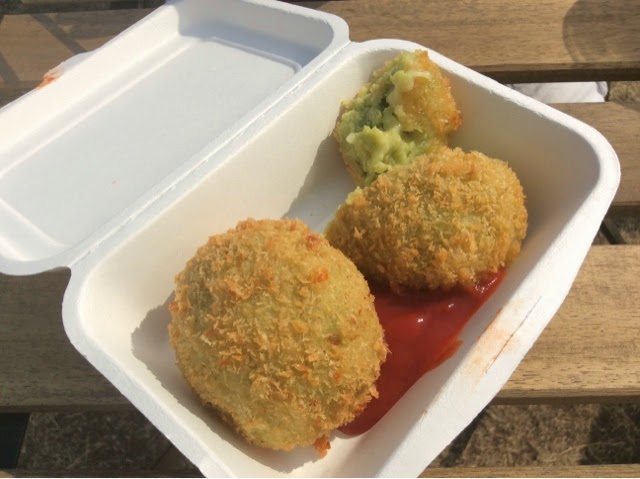 I chose these avocado croquettes as my last dish as it sounded the most interesting. You can see the tinge of green color peeking out of the part I cut open. Yeah that's the avocado purée that's blended into mashed potatoes with some cheese. Hmm...I really don't know what to say. I could hardly taste the avocado in there and without dousing it in ketchup, is was simply too bland.

The food was obviously not the best and perhaps I chose the wrong vendors to eat from. Or perhaps my expectations were simply too high. Either way, there was nothing else I wanted to try and I left the festival feeling hungry for more. However nothing keeps me feeling down for too long. On the train ride home, I was already happy trying to decide what to eat for dinner.