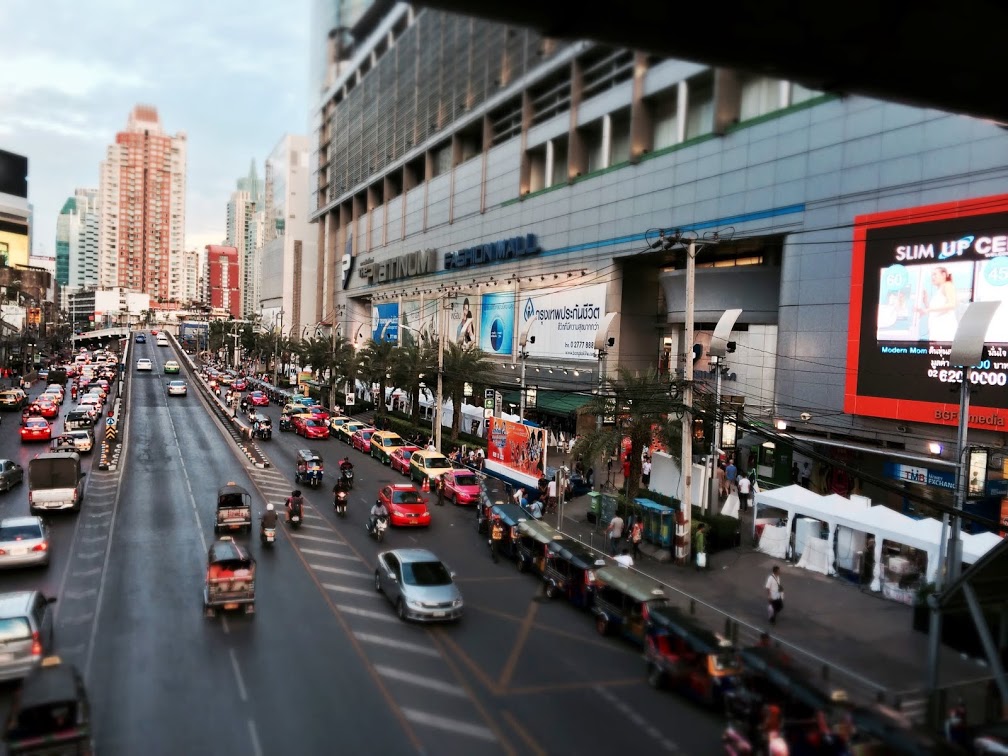 My second day in Bangkok was all about shopping and eating. That's right. Bangkok is a shopper's paradise and a food haven, made especially enticing by extremely low prices. And although it's easy to find expensive brand name luxury items like Louis Vuitton or Gucci, I'm much more interested in looking for unique Thai handicrafts and no-brand clothing created for the local market.

On this particular day, we went to explore the Pratunam area of Bangkok, known for their markets that sell wholesale clothing for dirt-cheap prices. For most women, the Pratunam Market as well as the Platinum Mall are two places that are on their must-visit list. Clothing doesn't get any cheaper than this.

Unfortunately for us, we didn't find much of interest as most of the offerings were women-centric. Still it was nice to see this side of town, which was very local in flavor. No luxury brands here. Just really cheap clothing and shoes, accessories of all types, and well, just about anything you can think of.

I bought myself a bagful of dried tamarind fruits and two bags of dried mangoes. They were unbelievably cheap and I decided they would make great gifts. 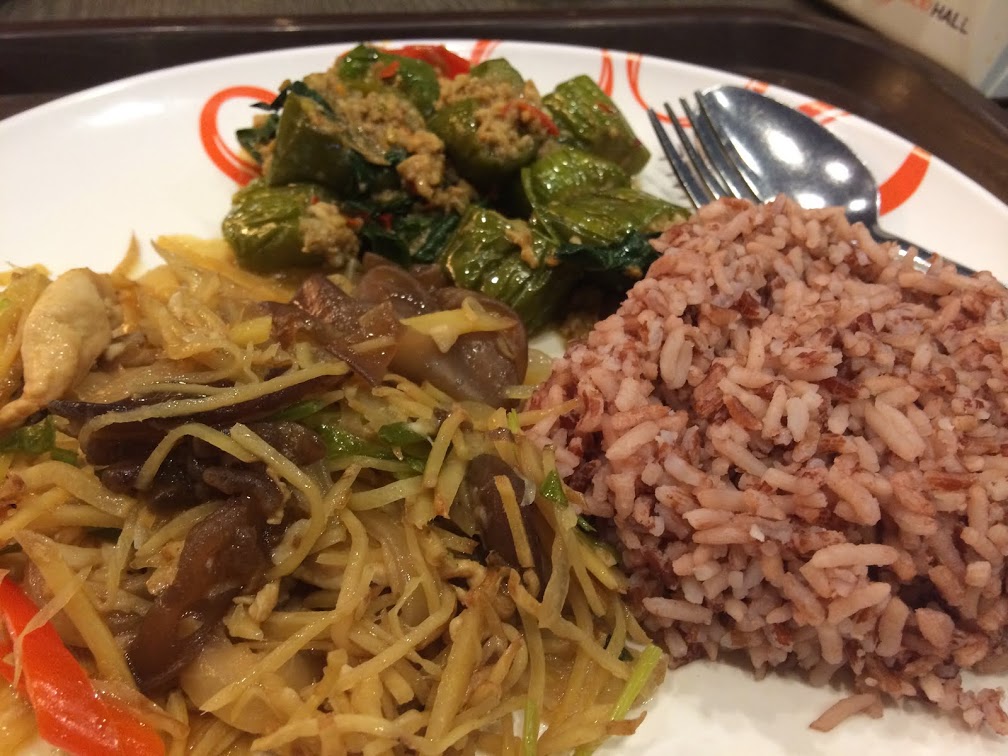 For lunch, we decided to eat in the incredible food court at the mega mall that is the Siam Paragon. The food  court with adjoining food emporium located on the ground floor, is an incredible place. As soon as I step into this food paradise, my feet get weak from the sheer variety of enticing temptations that are displayed beautifully one after another. I have to literally ignore all the cakes and sweets vendors in order to successfully get to the lunch offerings. Lucky for me, my friend kept pushing me from behind and reminded me to keep moving.

Although there was lots to choose from, I immediately went for my favorite food stall that offers a variety of traditional Thai dishes that can be eaten along with some rice.  I got myself a plate of whole grain rice for some extra fiber, along with a selection of two traditional Thai vegetarian selections. There were no names of the food displayed so I can't tell you what they were called, but they tasted so good I licked my plate clean!

One selection was a non-spicy ginger stir-fry which complimented the choice of spicy eggplants. The stir-fried slivers of ginger were cooked together with thinly-sliced bamboo shoots and shiitake mushrooms in a light oyster sauce. The eggplants were smothered in a very spicy sauce. Alternating between the two dishes along with spoonfuls of rice made it easy to finish it despite the intense spiciness of the eggplant dish. 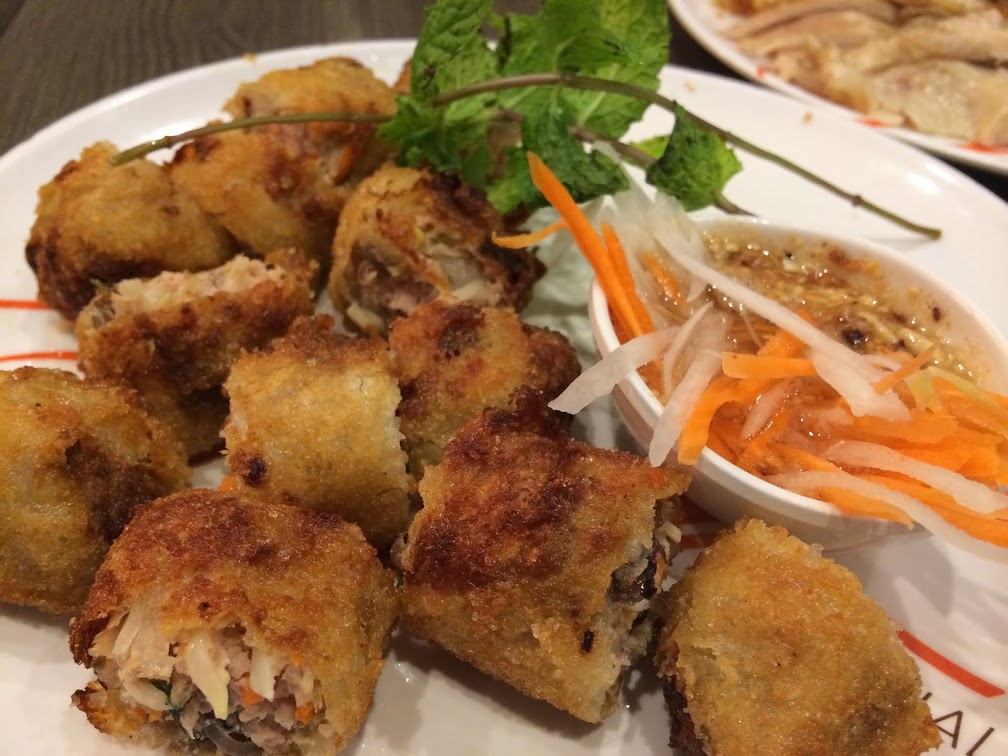 I also got a side order of crispy fried spring rolls. I love these so much I could eat two plates of these by myself. They are so much lighter than their Chinese counterparts as they are wrapped in rice paper rather than flour wrappers. Eaten with sprigs of fresh mint and a sweet sauce filled with sliced radish, carrots and peanuts, they are bite-sized morsels of pure delight. 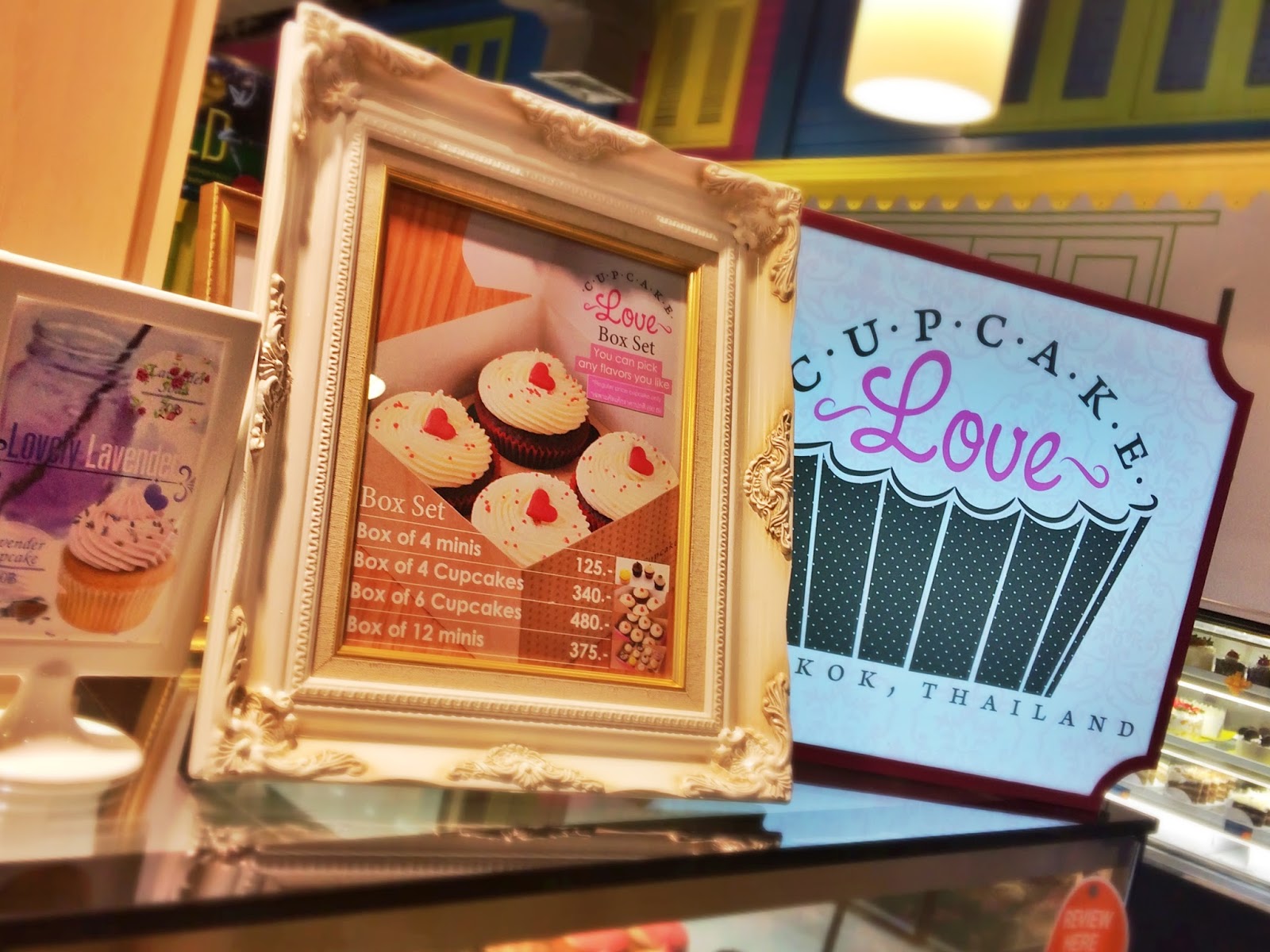 After a couple of hours shopping and browsing at the huge mall, we decided to take a detour through the Central World, another mammoth department store located a few minutes from Siam Paragon. By a stroke of luck, we stumbled upon a beautiful cupcake shop that just called out to me. 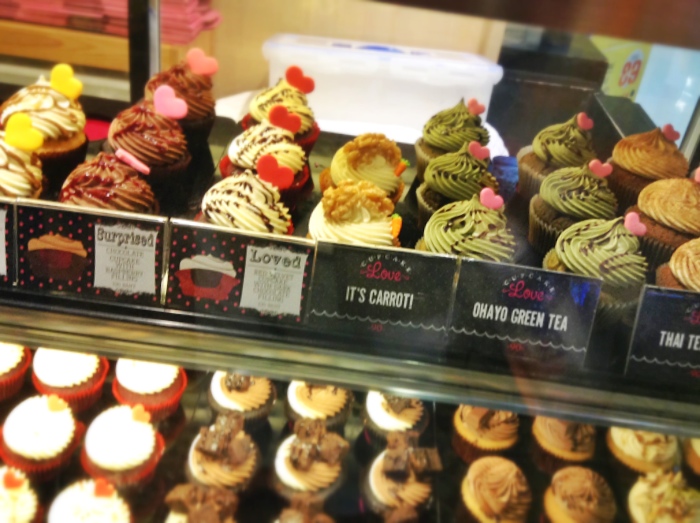 Resistance was futile so I immediately gave in to temptation and bought myself a box of just two. No more and no less. Believe me, it was extremely difficult not to buy more. But I knew I'd be coming back for more if these cupcakes were any good. I usually judge a cupcakery by two flavors - Red Velvet and Chocolate, probably because they are two of my favorites and if they can't get those right, they've miserably failed in my book. So that's exactly what I got-a Red Velvet Cupcake and a Chocolate Brownie Cupcake, both looking so temptingly beautiful I just wanted to inhale them on the spot. I am happy to report that I succeeded in containing myself in a civilized manner. 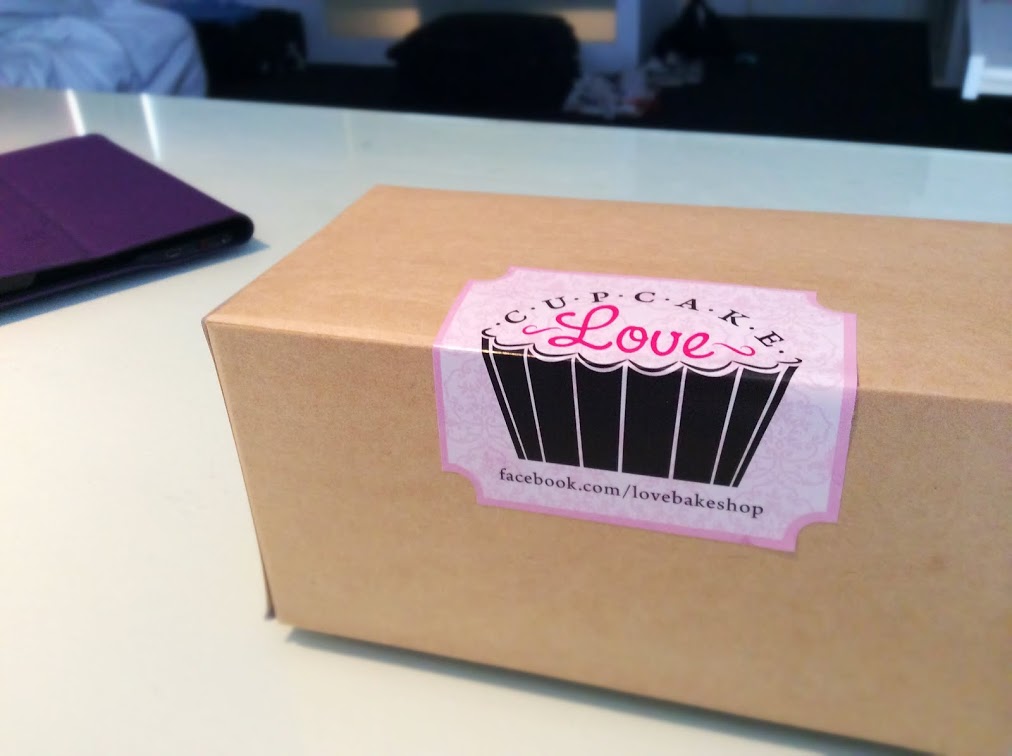 Once in the confines and safety of my hotel room, I immediately placed the attractive box of cupcakes on my desk. I contemplated about saving them for later, but that idea was scrapped within seconds. 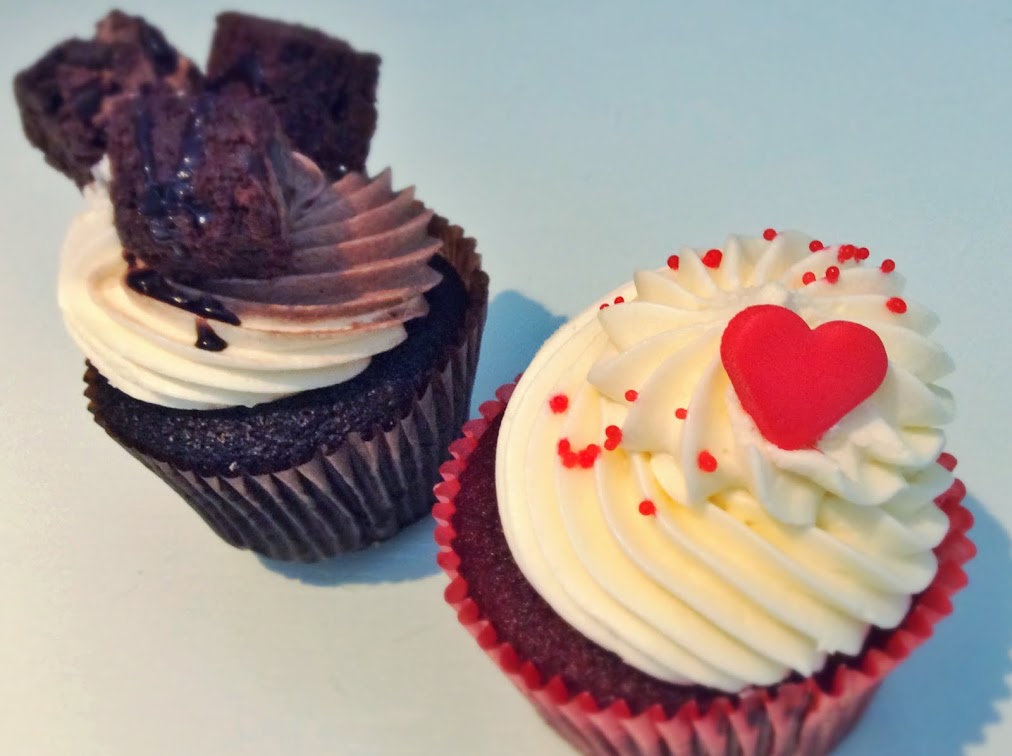 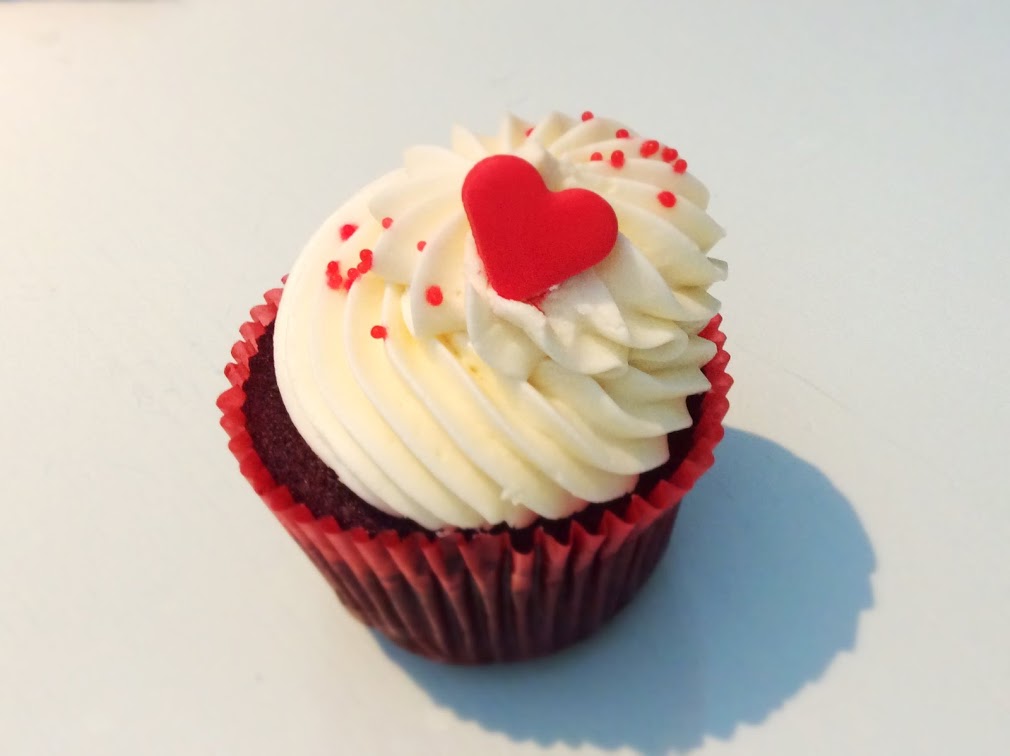 There's nothing more satisfying than a piece of good Red Velvet Cake and it's even better when it comes in cupcake form. The Red Velvet Cupcake from Cupcake Love did not disappoint. I would even go as far as say they were probably the best Red Velvet Cupcakes I've ever eaten anywhere!

The cake was moist and had a fantastic flavor with distinctive hints of cocoa. The cream cheese frosting was perfect in its sweetness and smoothness in texture. This one was definitely a winner. 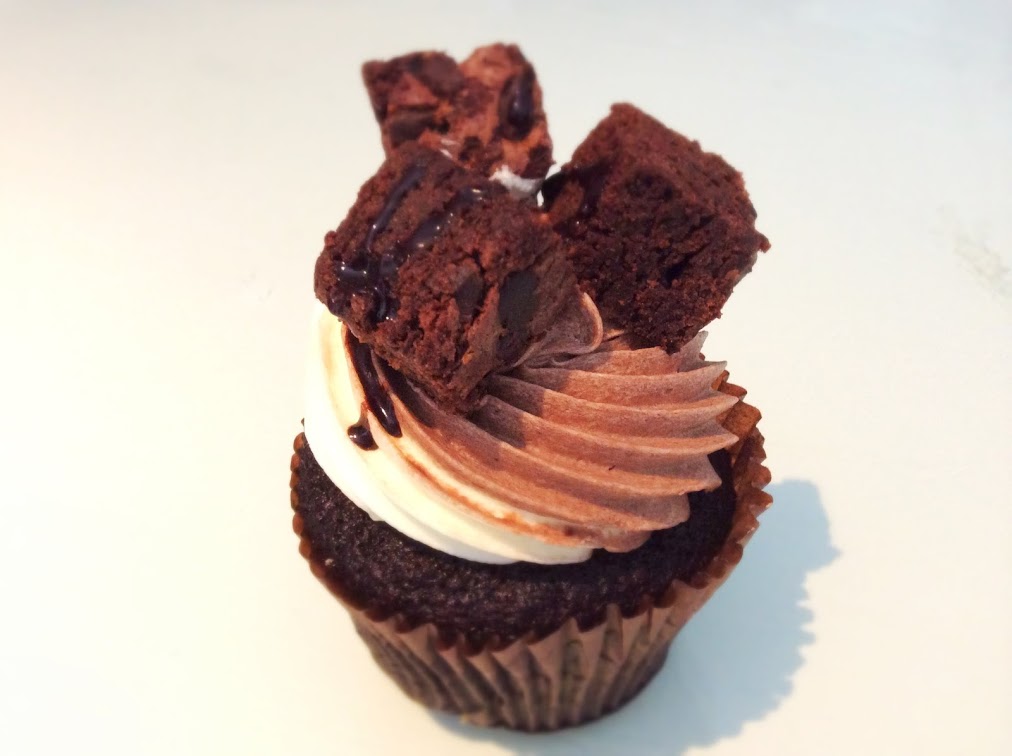 The Brownie Chocolate Cupcake on the other hand, was just OK. The cake was a bit on the dry side, possibly due to being in the display case for too long. It was a shame because it looked so good. The flavors were pretty good, but even with all the fancy things going on, this cupcake tasted surprisingly one-dimensional. The cake, the frosting and the brownies simply tasted too much alike.

However I wasn't about to give up on this Bangkok cupcakery. I will definitely be going back to try some other flavors in a few days. I have my eye on you Lavender Cupcake!

If you enjoyed this post, don't forget to subscribe to my newsletter. It's FREE and get exclusive recipes, food news and more!