Many people have asked us to do a recipe for Karaage for the longest time. The only reason I can think of is that there are so many recipes out there for Japanese Fried Chicken, which is probably why we weren't that enthusiastic about putting a recipe out. We already have one version of this popular dish albeit a spicy version.

However we recently decided to experiment with the typical Karaage recipe by adding beer to the mix. Yes that's right. Beer! If you already watch our YouTube channel, you know that Satoshi likes beer. He loves beer. In fact, he NEEDS beer! So one day, he wondered what would happen if he added his favorite drink to a Karaage recipe? It turns out that adding beer actually helps in tenderizing the chicken! We also double-fried the chicken to make it extra crispy.

The recipe turned out so good, we finally decided to share it with you guys! So without further ado, here's Satoshi's recipe for Beer-Battered Karaage. 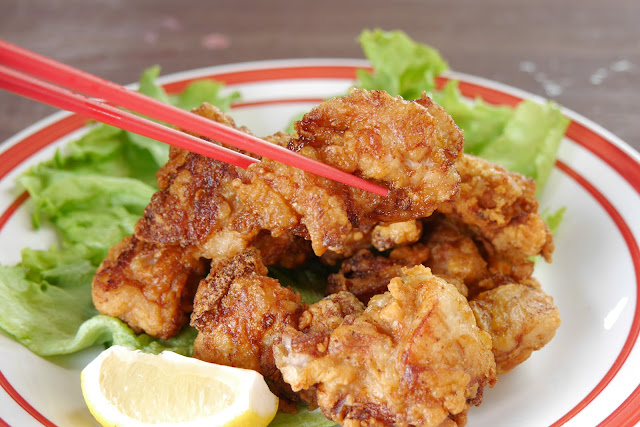 Cut chicken into 1-inch pieces and combined with soy sauce, ginger juice and beer. Marinate for 20 minutes. Drain chicken of excess liquid. Coat with flour and give it a quick massage. Coat with potato starch. Deep-fry in hot oil until crispy and golden brown. Take out and drain on paper towels. Crank up the heat to high and fry the chicken again for 30-60 seconds to make it extra crispy. Drain off excess oil and serve with lemon wedge if desired.