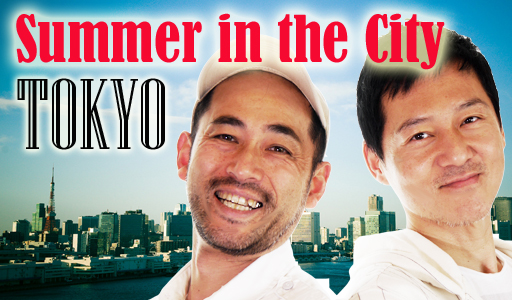 Hello friends. I first want to apologize for the lack of delays. It's been a crazy two months for me here in Tokyo with so many things going on at the same time. But since there's always something going on and I don't think things will get any better anytime soon, I just need to find a way to prioritize and keep things in balance.

My mother just went back home to Hawaii after a two month visit and as always I thoroughly enjoyed her visit. However it does make it harder to work as usual because after all, she is a mother. Working at home, she was either telling me to take rests, sleep longer, wake up early, eat breakfast, lunch and dinner, go take the dog for a walk, buy her rice balls or something. So yes I love her and I actually don't mind doing those things for her but I admit, it does make working more difficult.

Also making 6 videos every week did start taking its toll on my health. I got sick three times this year and in between, I felt lethargic, extreme fatigue and sometimes just plain moody. I also accepted a couple of new projects which I have no regret doing. But alas, there's never enough time is there?

I'm starting to sound like I'm trying to justify my lack of updates and that's probably what I'm doing. But I really wanted you guys to know that I'm still here and the updates will be coming more regularly.

Most recently we've been invited to participate in a Series called Summer in the City. As some of you may know, we are a part of the Tastemade Network and they choose a small handful of video creators to participate in their Spotlight Series. We were thrilled when we were asked to participate. Now let me tell you a little bit about what went on behind the scenes.

CLICK HERE TO WATCH THE SUMMER IN THE CITY VIDEO


The story behind the video is how we would spend a day in Tokyo during the summer, highlighting some of our favorite places as well as some awesome food. That's pretty much what you get on this video and although it's not perfect at least in my eyes, it's the best we could do on a budget with no crew. We're pretty happy with it.

Now a day in Tokyo is what you see on camera. In reality though, it took four days of shooting and it was tough trying to fit those days in along with our other videos. Did I mention my mother being here as well? Lots of sweat, planning and editing along with a dose of arguing, tantrums and frustration went into this video. But hopefully it doesn't show.

The only thing we want viewers to see is the excitement and passion we have for Tokyo, the place we call home. Hopefully you'll feel as though you're hanging out with us throughout the video.

I'll let you be the judge. Check out our Summer in Tokyo Video and let us know what you think. Make sure to subscribe to our channel and while you're at it, you might as well subscribe to this blog. For those subscribed already, I have a surprise in store for you guys in the near future.

Thanks for reading and hope you're all having a great June! Cheers!
Posted by Unknown at 12:15 AM