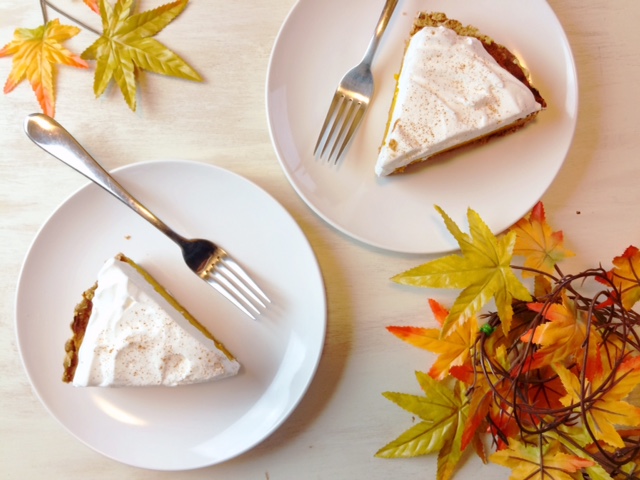 There are so many things I love about autumn. The cooler air pushes out the heavy clouds, making room for clear blue skies. The air becomes nippy and cold,  making a mug of hot chocolate or apple cider my drinks of choice.

However what I like most is the abundance of fall produce that's available at this time of the year. Sweet potatoes, chestnuts and pumpkins. Sure they're available year around, but this is when they taste their absolute best. And don't get me started on the sweet persimmons, pears and apples that dominate the produce section. I can hardly stand it!One drawback to all of this good food is that it's way too easy to put on those extra pounds.

So what does a foodie like me do? Should I forsake partaking in all the fall bounty in exchange for a svelte physique? Or should I ditch the diet and eat as much sweet potatoes and pumpkins as I can manage to stuff into my mouth while it lasts?

I've done it before, yes I have. A few years ago, I actually avoided food that were high in carbs. This included sweet potatoes, pumpkins, and all the fruits that I love. I stayed slim and trim and I was happy to a certain point. But who am I kidding? I missed those damn persimmons. I pretended to hate my chestnut rice that I'd been eating for years.

So this year, I decided to do something unbelievable. I decided to let myself eat all this wonderful food like any other sane person would. I indulged in baked sweet potatoes and pumpkin soup. I ate the sweetest persimmons that have ever passed my lips. And guess what? I managed not to gain any weight. As long as I was sensible, I could pretty much eat anything I wanted. Haha! Now I've said it before and I'll say it again. I love dessert. In fact, that's probably the understatement of the year! I can just see all my friends knowingly nod in agreement and I don't blame them. All year, I whip up batches of cupcakes, buckets of ice cream and cakes.

Come autumn time, my mood changes and I start to crave something just a little bit heartier and this usually means pumpkin pie. Apple pie is good too but for me, pumpkin pie is what epitomizes the entire fall season.

This year was no different but instead of making a pie, I decided to go with a tart instead. The photos on this post clearly show that I've created a beautiful tart. Now I sort of knew that there was a difference between the two, but while eating a slice of pumpkin tart, I got to wondering. What exactly are the differences between a pie and a tart? After some research, this is what I learned.

A pie is a dish with a crust and a filling, baked in a pan with sides that are sloped. The goal is a crisp and flaky crust and pies are usually served straight from the dish in which they were baked.

If you think about it, pies and tarts are very similar in that it wouldn't be too strange to see them in the same category. In fact, on my Pinterest Board, I group pies and tarts into one board because I just don't see the point in separating the two.

Now the reason for all the unnecessary babbling is because of the fact that while I assumed I was making a pie, in reality, I was actually making a tart. And a gluten-free one at that!

OK, I sincerely apologize for the long story. I'll get straight to the point.

This gluten-free pumpkin tart uses almond flour instead of the usual wheat flour. This helps me to not gain unnecessary weight ( believe me it works ) while letting me indulge in a delicious pumpkin dessert and let me tell you, this one is really good! The whipped topping really makes this tart special and elevates it to a whole new level. 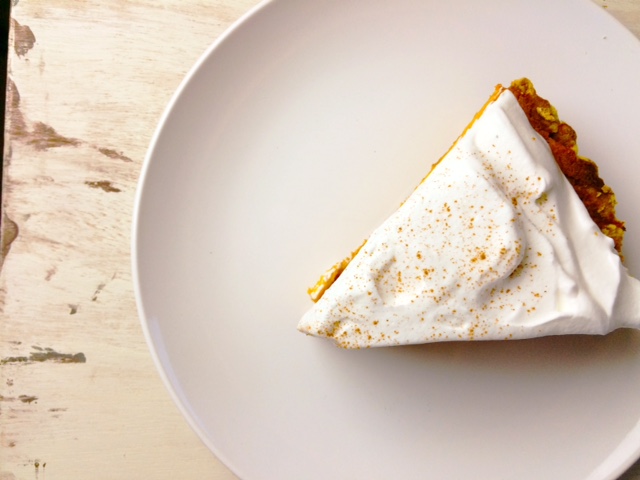 Preheat oven to 350F or 180C. In large bowl, combine almond flour, salt and baking soda. Add grapeseed oil, honey and vanilla extract. Mix until well combined. Press the mixture into a 9 1/2 inch tart pan. Bake for 10-15 minutes until golden brown. Take out from oven and cool completely before filling.

To make the filling, add pureed pumpkin, honey, milk and cinnamon or pumpkin spice in a large bowl. Mix well until the filling is smooth. Pour into tart crust. Bake in preheated oven at 325 F or 170C for 30-45 minutes. Check the tart at 30 minutes. Insert a toothpick in the center. If it comes out clean it is done. If not, continue cooking for another 10-15 minutes. Cook the tart for 30 minutes before serving.

Let me know how you liked this recipe in the comments below. Also check out my how-to video to see just how easy it is to make.

I hope you enjoyed this dish. Let me know what you think in the comments below. I'd love to know what you've thought.
As always thanks so much for reading. Subscribe to this blog, visit my YouTube channel and connect with me on social media by clicking on the social media icons on the sidebar. Thanks and hope you're all having a wonderful day!