Magnolia Bakery in Tokyo - The Best Cupcakes in Town 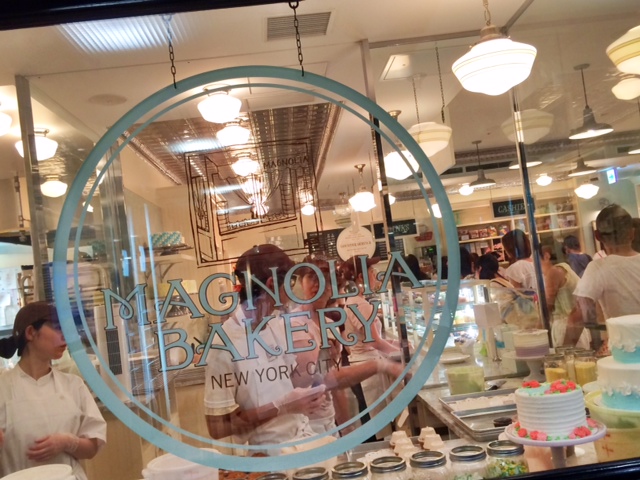 As soon as I made sure I wasn't seeing things, I involuntarily yelled "YES!" at the top of my lungs. Seconds later, my fellow passengers were doing their best to avoid eye contact with me, most likely thinking I was some kind of lunatic with a rare brain disorder. I got off at the very next station to save myself from further embarrassment.

So you can imagine my excitement when I finally got the chance to visit this summer. Based in New York, Magnolia Bakery opened it's doors in 1996, on a small corner in the West Village of New York City. Their cupcakes became famous after making appearances on movies and TV shows such as Sex and the City and The Devil Wears Prada. 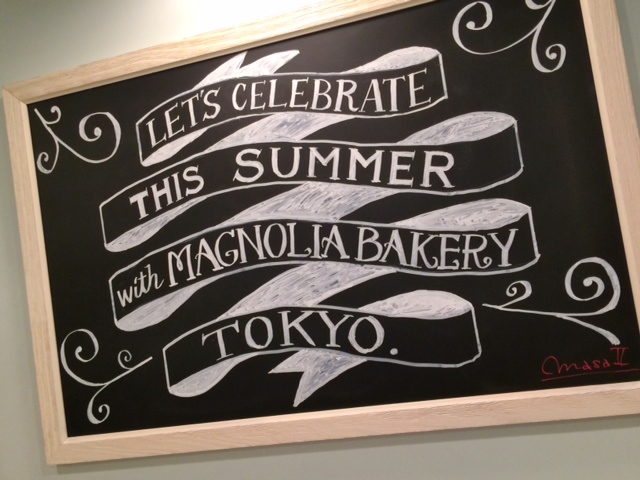 I arrived on Magnolia Bakery's pastel-colored doorsteps on a hot and humid summer afternoon to find it absent from any long lines ( typical of new dessert places, doughnut shops and pancake houses in Tokyo ). A glass window at the entrance lets you see the cupcakes being made and watching the staff frosting the cakes with Magnolia's signature "swirl" was hypnotizing. 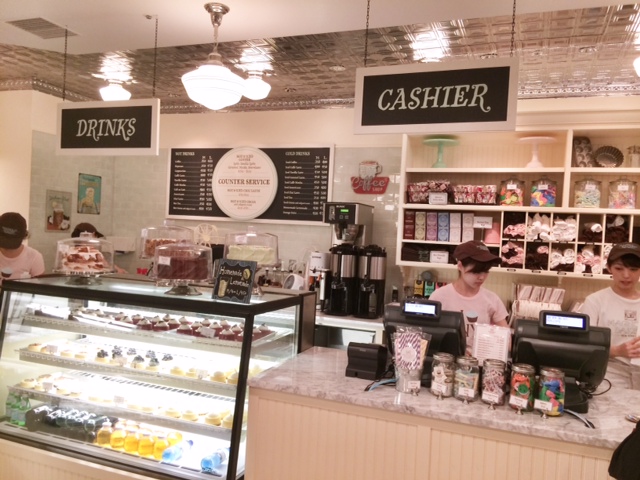 The interior is airy with lots of space, a welcome change from the cramped and claustrophobic interiors of most bakeries in Japan. The look is vintage America using calming colors of off-white and light pastels. In fact, it sort of feels like a shop you'd find on Main Street U.S.A. in Disneyland. I like it! 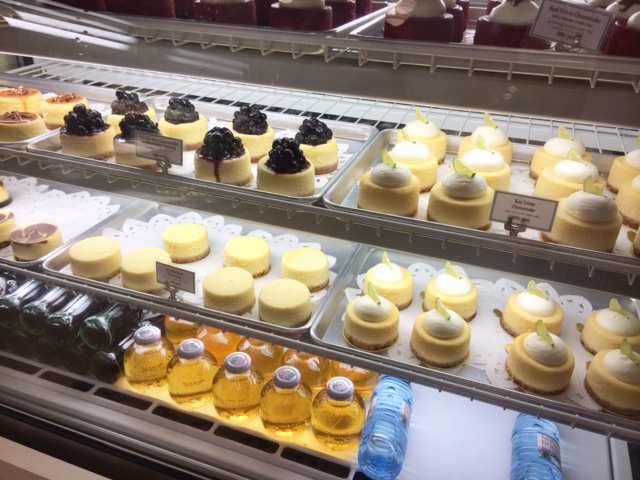 Checking out the goodies on display, I knew I was in trouble. There were so many of my favorites that I knew I had to choose wisely to avoid spending a fortune. In addition to their famous cupcakes, there were a selection of old-fashioned cakes, cheesecakes, brownies, homemade pies, icebox cakes and puddings! Where else in Japan, can you find a selection like this? I don't think there is. 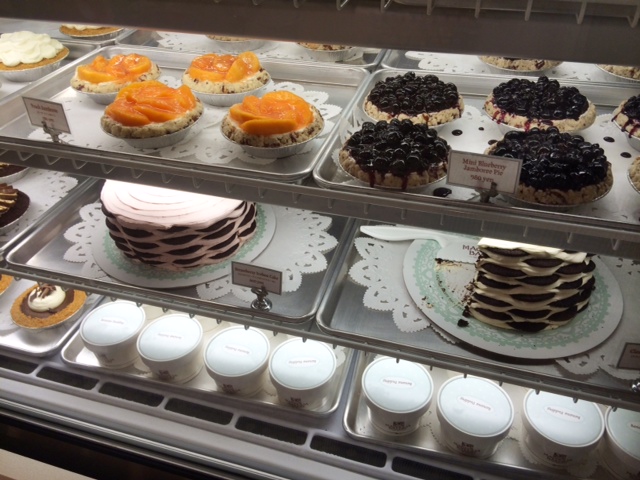 The menus and prices are pretty similar to the offerings in the U.S. stores. I already knew I wanted to try the basic cupcakes they are famous for. I had my eye on the cheesecake display and although the brownies and other bars caught my attention, I knew they could wait. 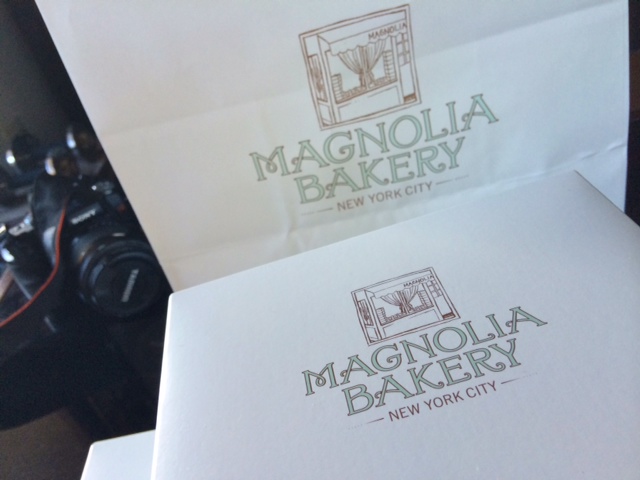 After scrutinizing the options, I decided on these. 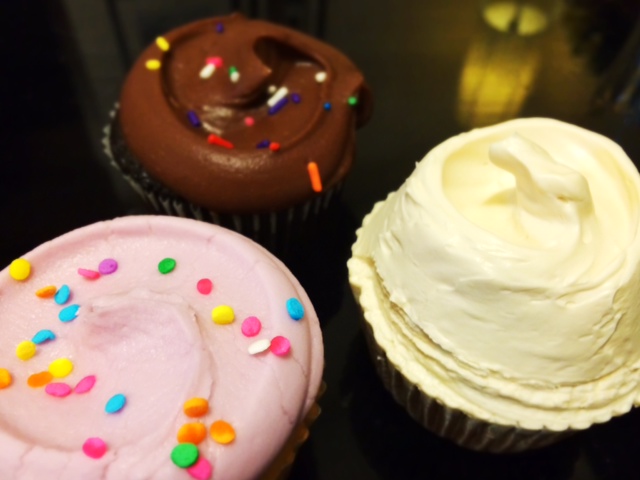 The total came out to a little over ¥3,100, which is around $30 US. Yes, good desserts don't come cheap, which is what made it so hard to decide. 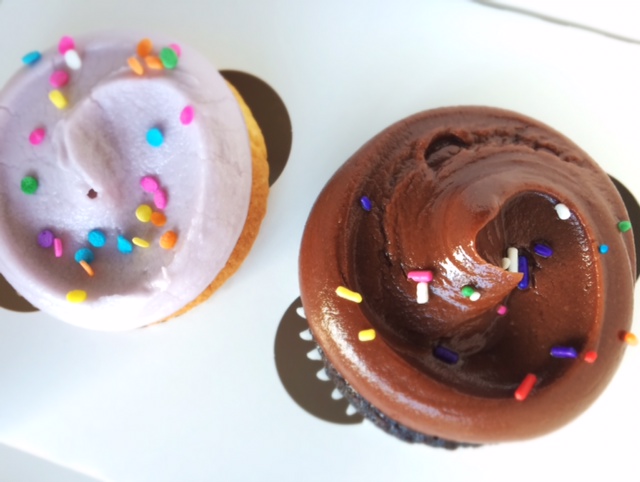 So how were the famed cupcakes of Magnolia bakery? They were everything I imagined they would be. The cakes were perfectly moist with good flavor, nothing tasting artificial. The vanilla stands out for its perfect balance of buttery cake and creamy vanilla frosting, but my favorite was the chocolate cupcake. Moist, chocolatey and simply decadent. The peanut butter was my least favorite. 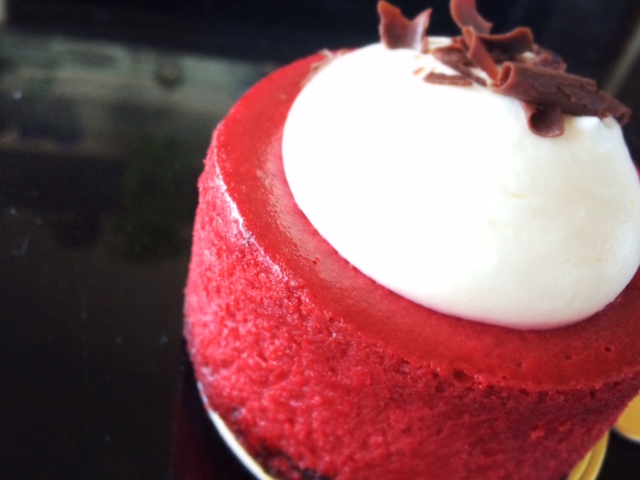 The cheesecake was good but not too sure if it was worth the ¥900 ($9US) price tag. It was very good as far as cheesecakes go, but there are many good cheesecake shops in Tokyo. 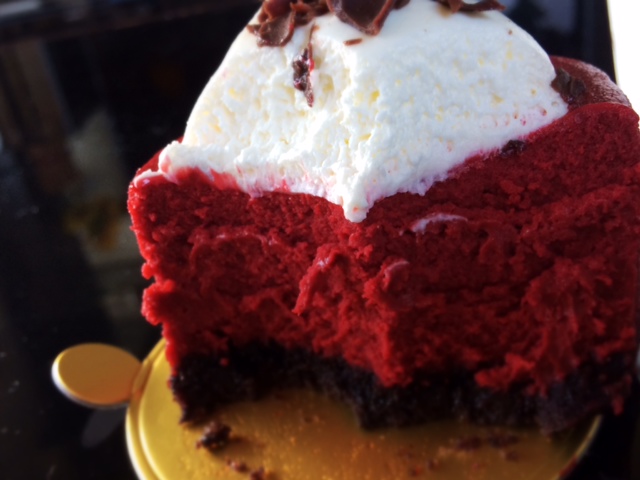 The chocolate crust really made this cheesecake stand out. 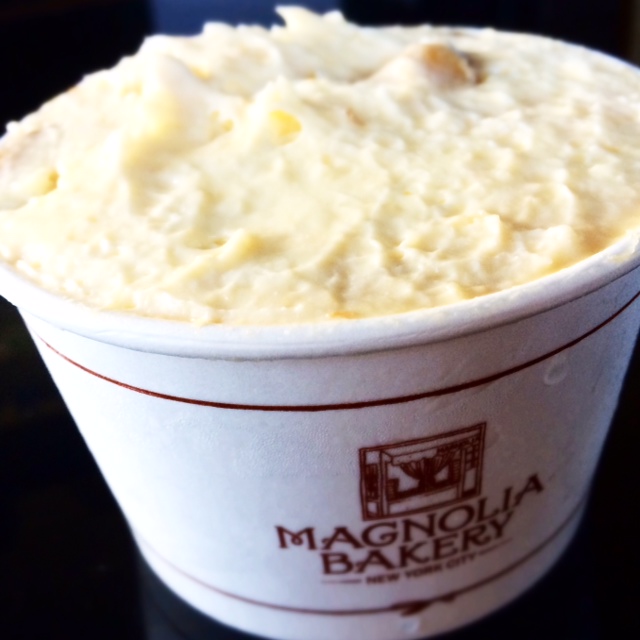 Their signature banana pudding was good though, and reminded me of the old-fashioned desserts of a bygone era. 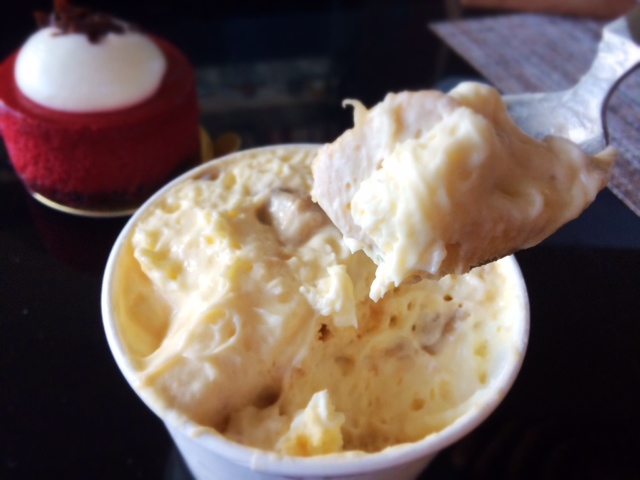 After I finished off this buffet of desserts in one sitting, I decided I needed to go back to pick up a few other items, all in the name of research and a proper blog post. Of course I didn't go back on the same day. That would be beyond crazy even for me!

So, a few days later I found myself going back you pick up another cupcake along with a few bars, including the brownie that was just begging me to take it home. 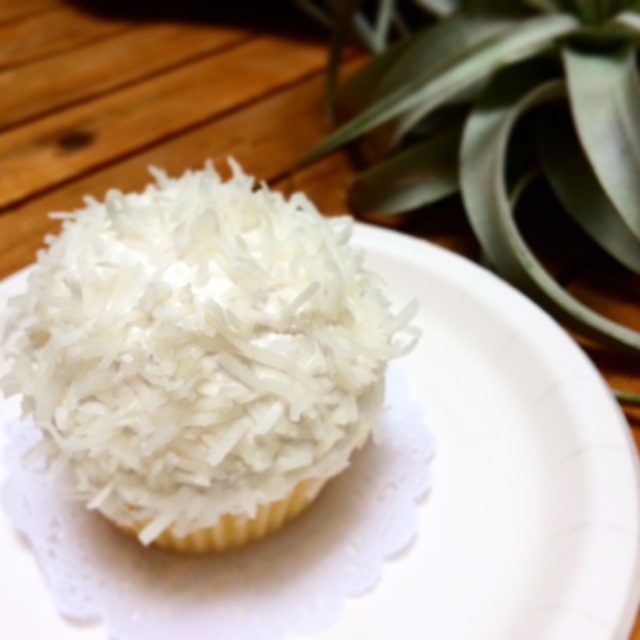 These found their way into my cute Magnolia Bakery Takeaway Bag.

I decided to devour the cupcake at the store, taking home the rest for later. You see, I learned something from my last visit. It is extremely important, in fact crucial, to eat the cupcakes as soon as you can. In the summer heat, the frosting will melt and leave you with a topless cupcake ( Sounds sexier than it sounds )! Although they supply those ice packets to keep the cheesecakes and puddings cold for up to an hour, they don't do the same for cupcakes.

Finding a seat was a breeze as there is additional seating right outside the store. Without wasting any time, I dug right in the the coconut cupcake. Honestly, it wasn't my favorite. It was a coconut cupcake. Nothing special. Meh. I wish they added something extra to it. Perhaps a coconut filling? Or instead of just topping it off with shredded coconuts, perhaps make the frosting taste like coconut as well. It sure would amp up the coconut flavor up a notch or two. It simply tasted like a regular vanilla cupcake with a light sprinkling of coconut on top. Oh well, moving on. 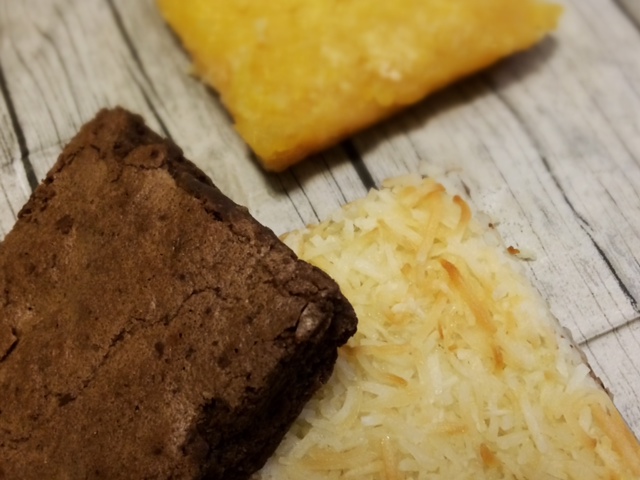 Back at home, I got ready to sample the bars. Starting off with the Lemon Bar. This was very good and not that different from other good lemon bars I've had in the U.S. The one I had at Kaka'ako Kitchen in Honolulu tasted almost identical. Which came first? Who really cares. 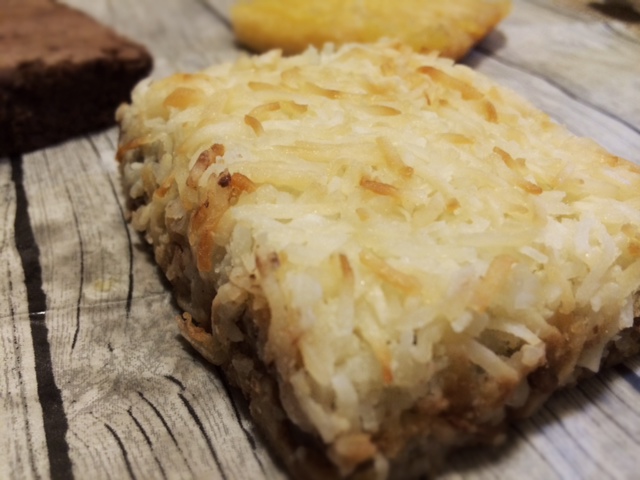 The Magic Cookie bar was also tasty, but too much dry coconut for my taste and it simply wasn't "magical" enough for my sophisticated taste buds ( uh huh, right ). 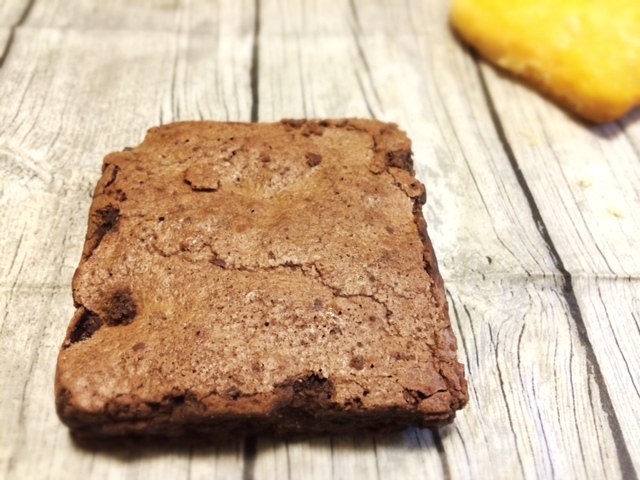 Finally the humble looking Double Fudge Brownie. I saved this for last because frankly it didn't look like much, but boy in this case, looks can be deceiving. This was definitely the winner in my case. One of the most perfect brownies I've tasted, with chocolate chips hidden inside the rather bland exterior. The slight chewiness combined with the perfectly-balanced sweetness was pure heaven. With each bite, you got chewiness, sweetness and one or two chocolate chips. Seriously good stuff.

I love Magnolia Bakery and I'm thrilled they opened one in Tokyo. I no longer have to fly all the way to New York for a good old-fashioned cupcake. I am happy. My life is complete.

Did you enjoy this post? Are you obsessed about food as I am? How about a FREE copy of 10 of my favorite recipes delivered straight to your email box? Yes? Then don't forget to subscribe to my newsletter. It's completely free and I promise to only send you things that are fun, yummy or fabulous! Thanks for reading. :)