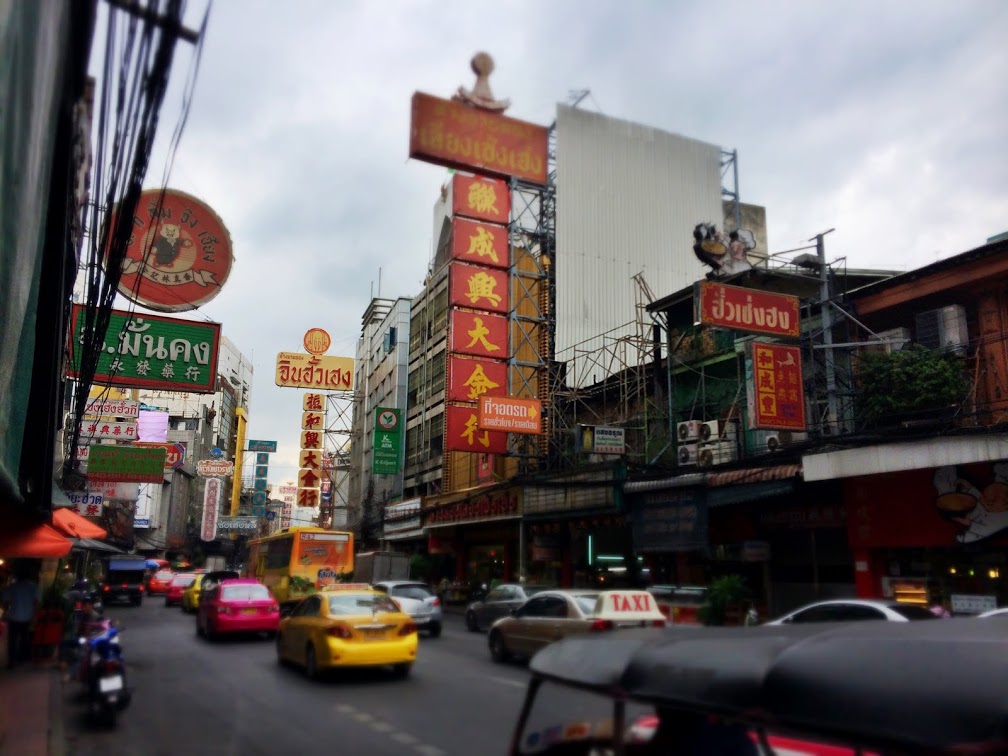 By the time we left the temple of the Golden Buddha in Part 1 of Day 2 in Bangkok, I was hot, dehydrated and drained of whatever energy I had left in this old body of mine. So when we finally arrived in Chinatown, we walked into the first Chinese restaurant we could find. It was too hot to go on any further and I needed to cool off and replenish my fluids. 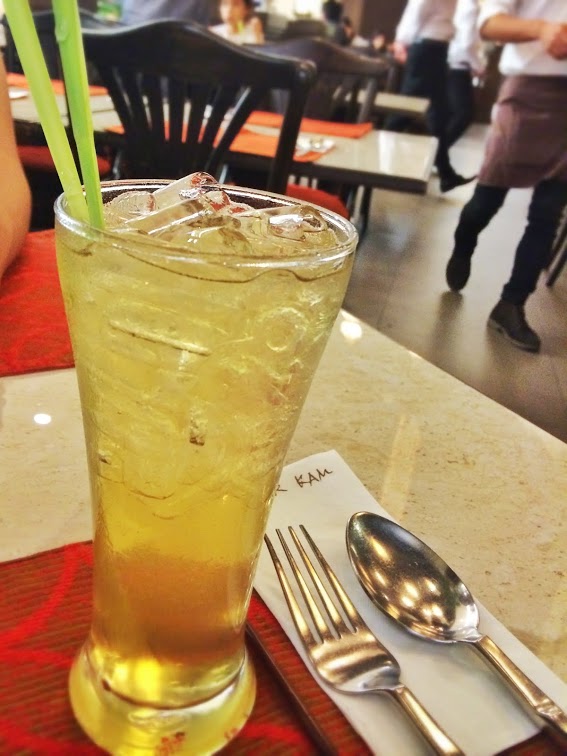 As we entered the air-conditioned restaurant, our bodies immediately started to cool down. The cold towels they handed us were refreshing and as we sipped our iced chrysanthemum teas, we began to relax. 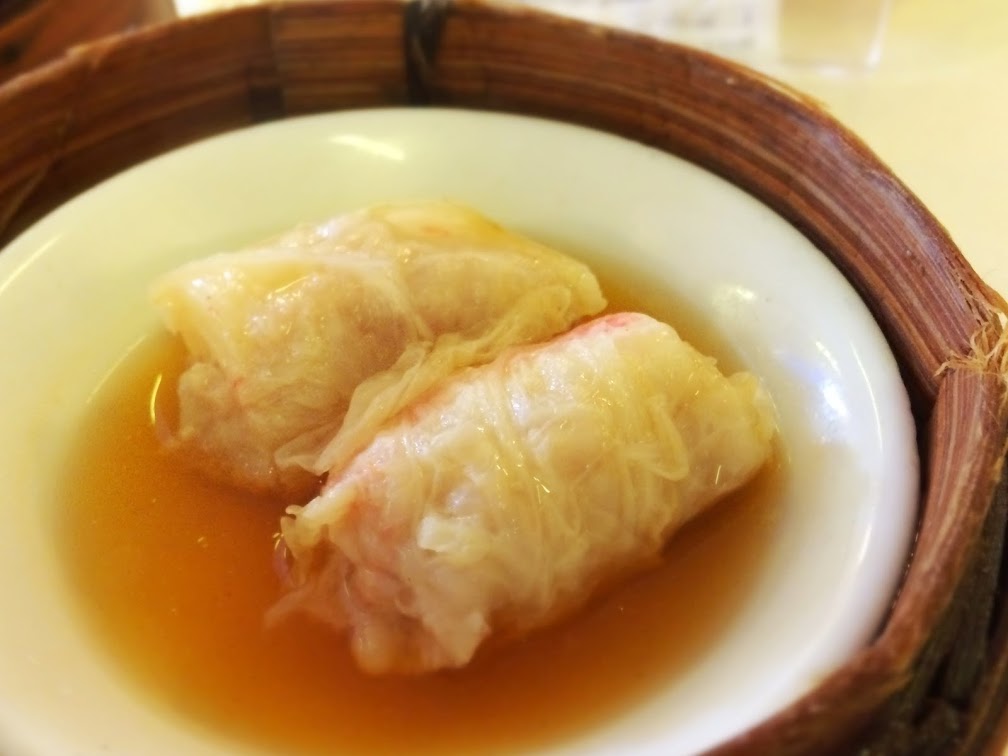 Restaurants in Chinatown is known for good food and I've been told that you could literally choose any one and you wouldn't be disappointed. Now I don't know if that's true or not, but the one we were dining in was fantastic.

We decided to order from the selection of dim sum and a few other dishes to round out the meal. Our first selection was some kind of shrimp dumpling swimming in a light soy-based sauce. The shrimp were fresh and plump while the sauce was just the right amount of salty, complementing the flavors of the ingredients. 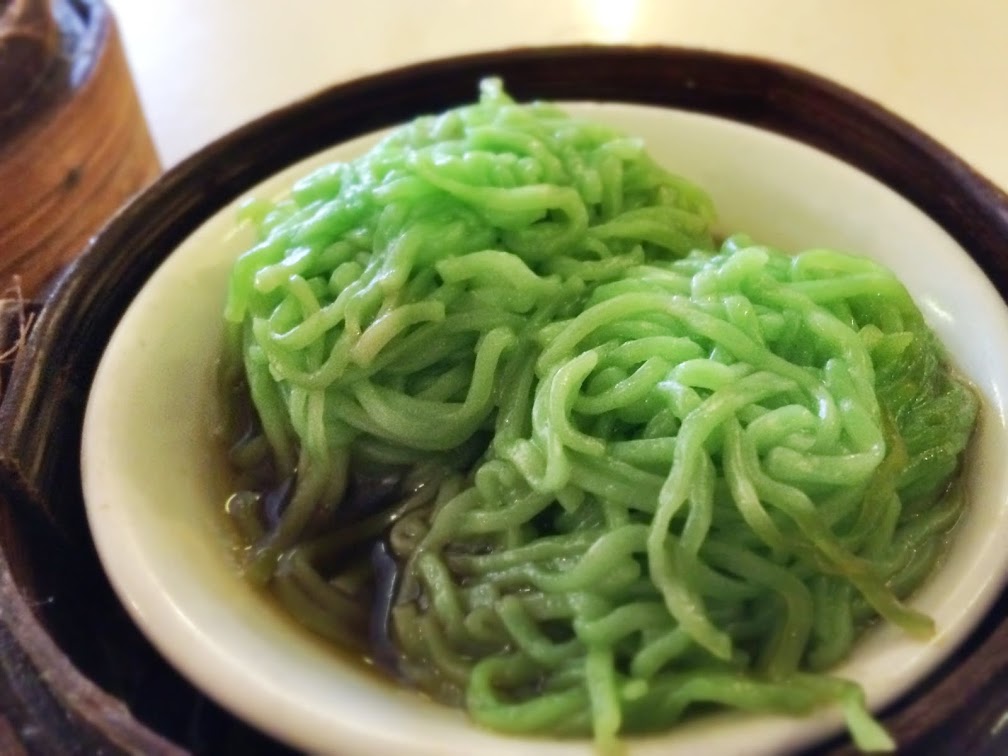 Our second choice was this funky looking one, which is seasoned ground pork encased in spinach noodles. Believe me, although they look kind of scary, they tasted better than they looked. In fact, they were wonderful. 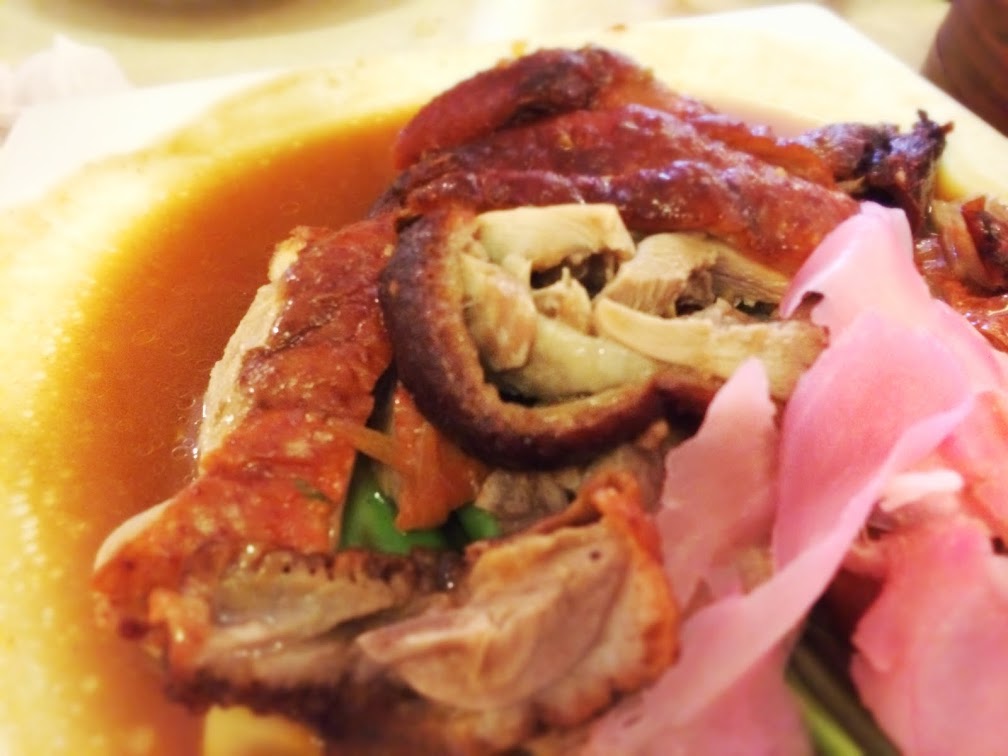 For our meat, I let my friend choose ( yes, I'm kind of bossy that way and decided to be nice today ) and he felt like duck. This turned out to be the highlight of the entire meal. Duck meat perfectly cooked in a nice sauce of soy and Chinese spices. 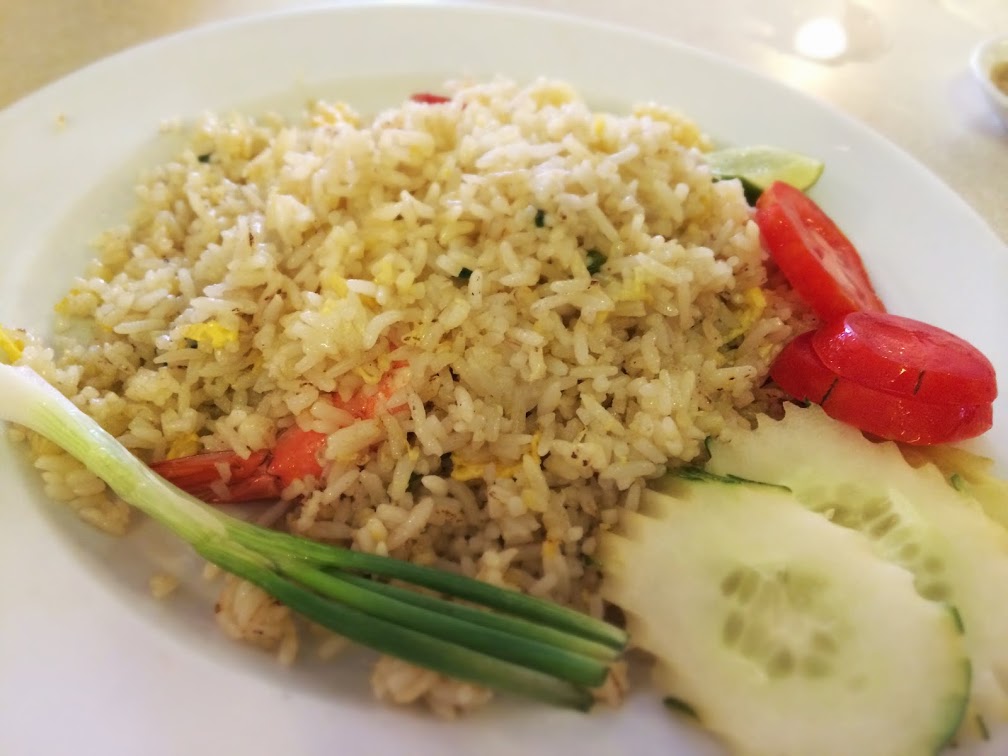 We finished off with some shrimp fried rice and it was very good indeed. Served Thai style with some raw cucumber and tomato slices and some extra chili sauce on the side. My friend loved this so much, I let him eat most of it. Besides, he loses weight just breathing, while I decided to save my carb allowance for later. 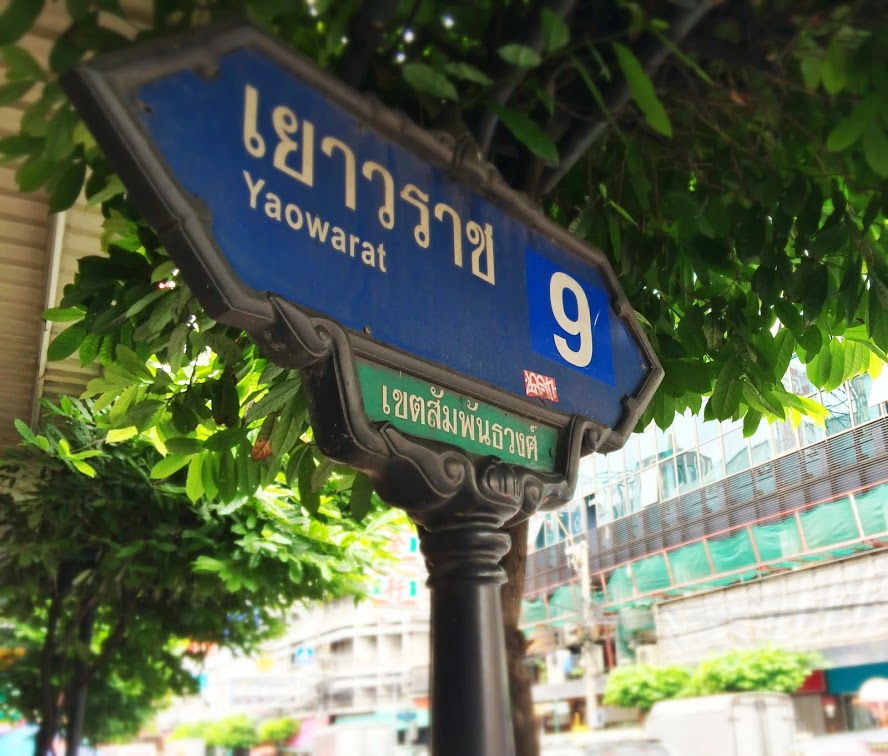 Invigorated albeit a bit lethargic due to excessive food consumption, we forged on into the deepest bowels of Chinatown. There are so many side streets with nooks and crannies every which way you turn, it's hard to decide which way to go. 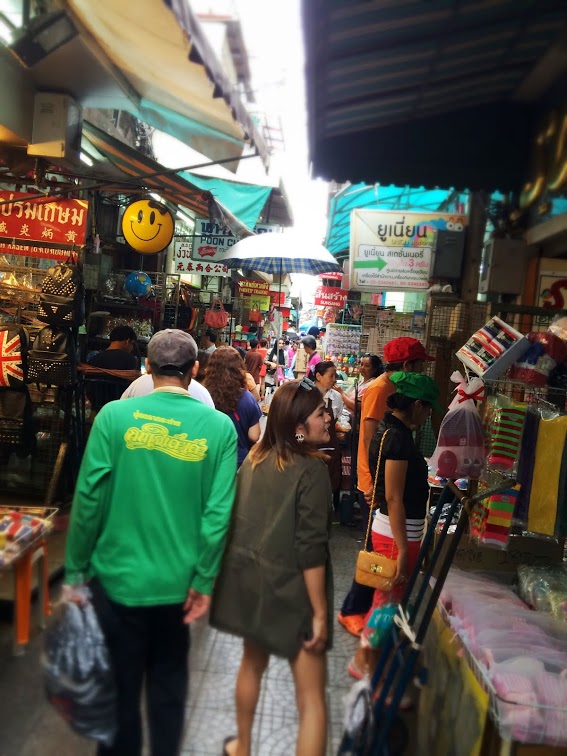 As we walked deeper into the core of Yaowarat, the streets became narrower, some only as wide as two average-sized human beings. Add some motorbikes, food trolleys and blind karaoke singers into the mix and it's amazing how it all works without anyone getting hurt. 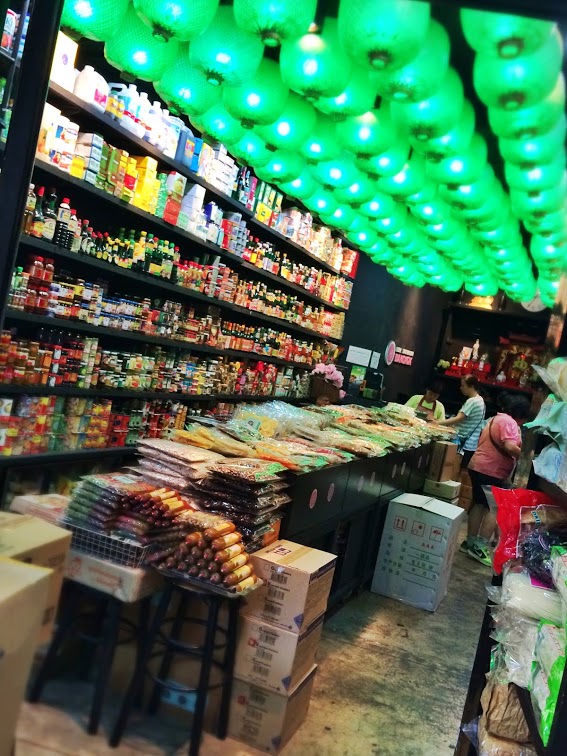 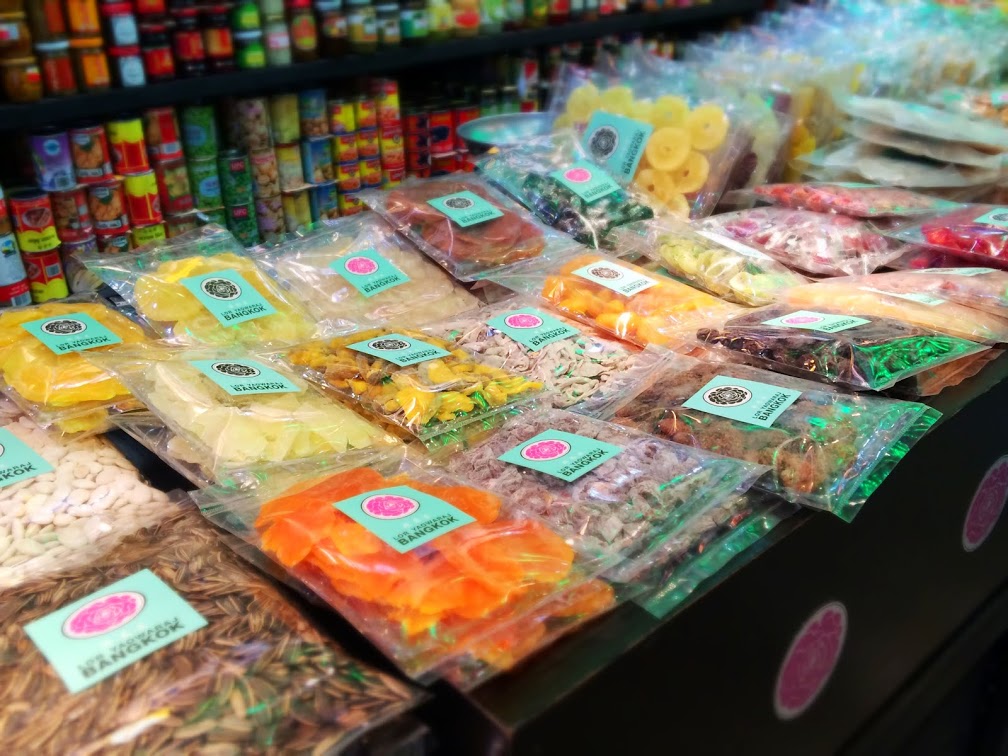 Hundreds of stores line both sides of the streets and narrow alleyways. From interesting trinkets to toys, wholesale priced shoes to dried tropical fruits all at amazingly low prices. 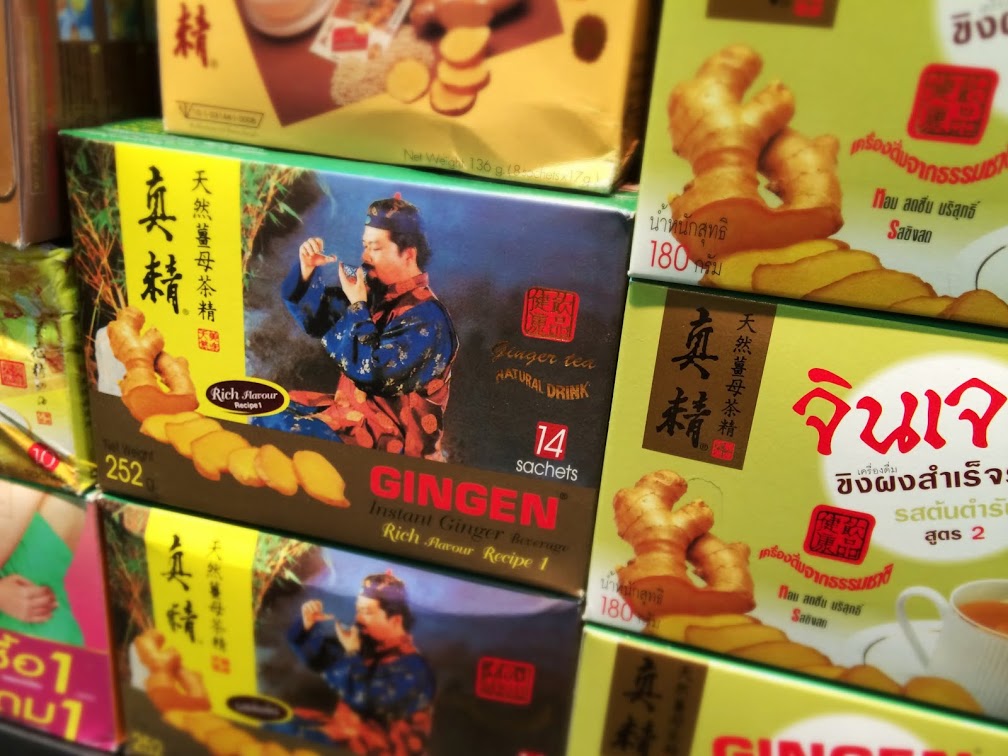 I especially love the boxes of packaged Chinese tea leaves. The variety of tea was mind-boggling. Oolong, Jasmine, Mango and even Ginger Oolong - I could have bought out the entire store! 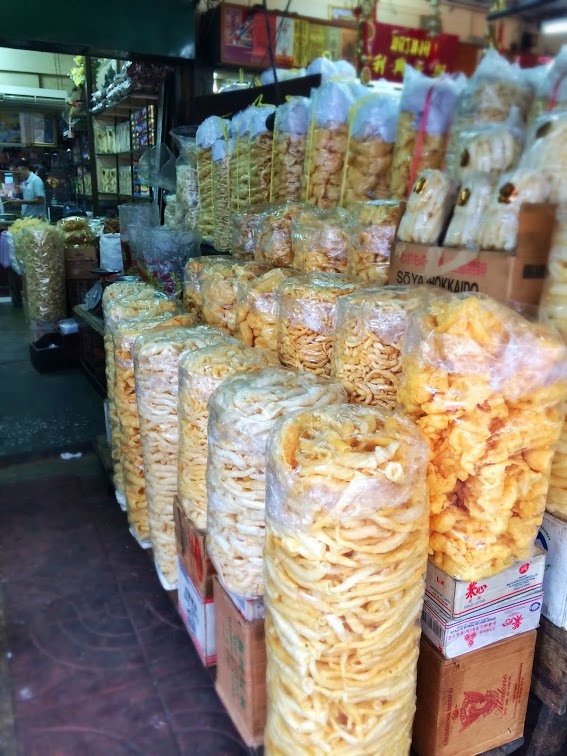 The first time I saw these, I had no idea what they were. This shop sells fish maw, which is swim bladder of fish. I had it once a long time ago and I remember not being much of a fan of fish maw but my cousin loves them. 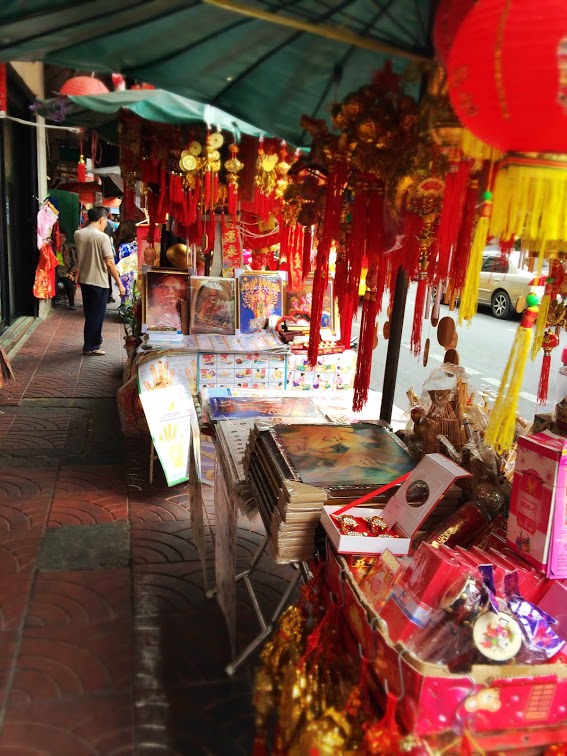 The streets seemed to go on forever and we finally decided to take a break as the heat was starting to get to us again. As we walked past street stalls selling Chinese souvenirs, we found the Black Canyon Cafe, a nice cafe to rest our weary legs. 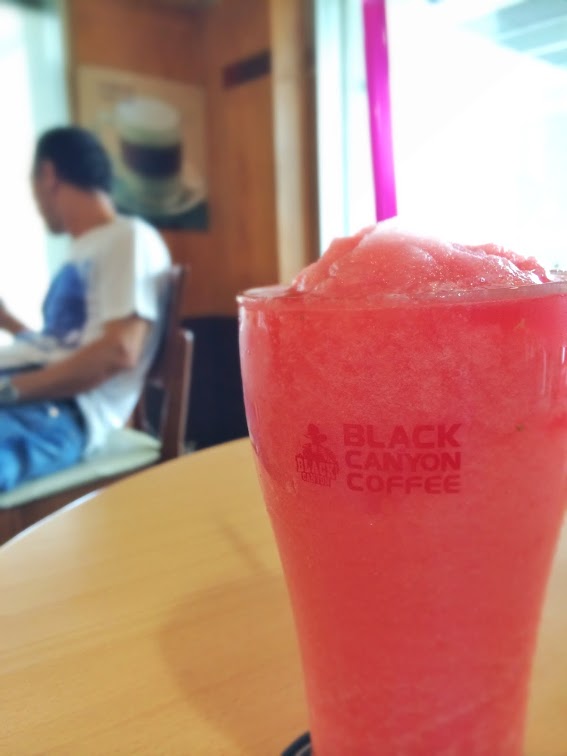 Probably one of my favorite drinks in Thailand is the Watermelon Shake. It's not really a shake but more like a watermelon slushy drink. Made with fresh watermelon, it literally tastes like a fresh watermelon in liquid form. This is incredibly refreshing and hydrating. I could drink this all day!


My friend decided to have a Thai Iced Tea, which was good as well albeit a bit on the heavy side. Fortunately for me, my friend didn't finish it all and I got to have a few sips of milky deliciousness. 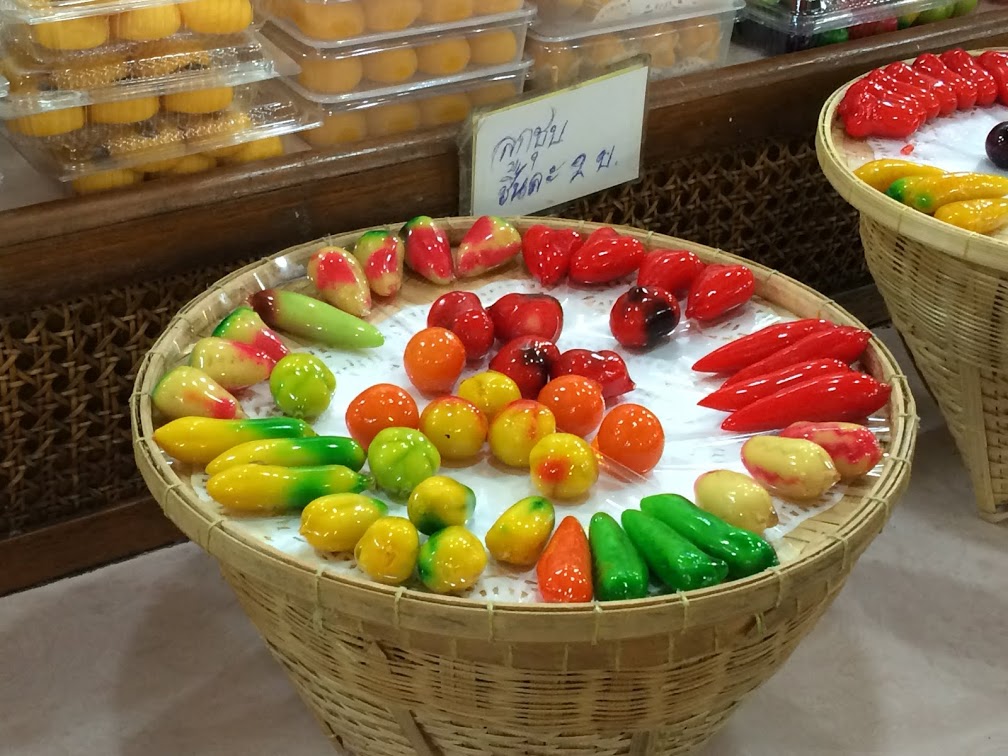 Located in the same building as Black Canyon Cafe, I was tempted by an entire floor devoted to traditional Thai sweets. The photo above shows, Lok Chup, sweets made with bean paste made to look like miniature fruits. Incredible aren't they? 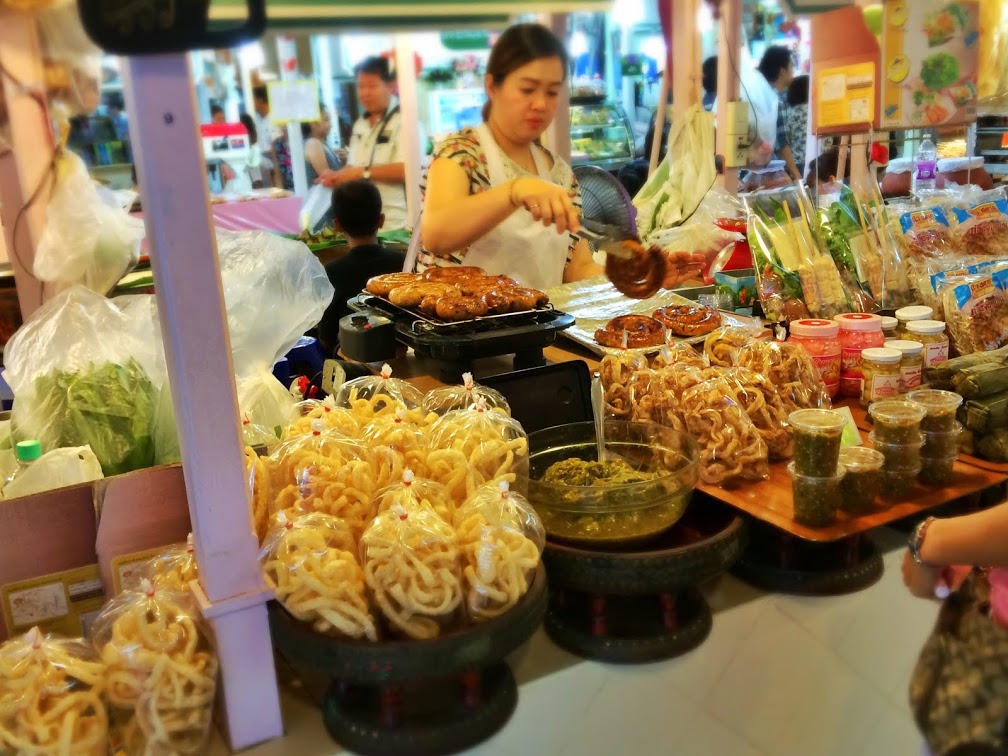 This stall was selling extremely aromatic Thai sausages, but by this time we were too full to eat anything. They sure looked good though. 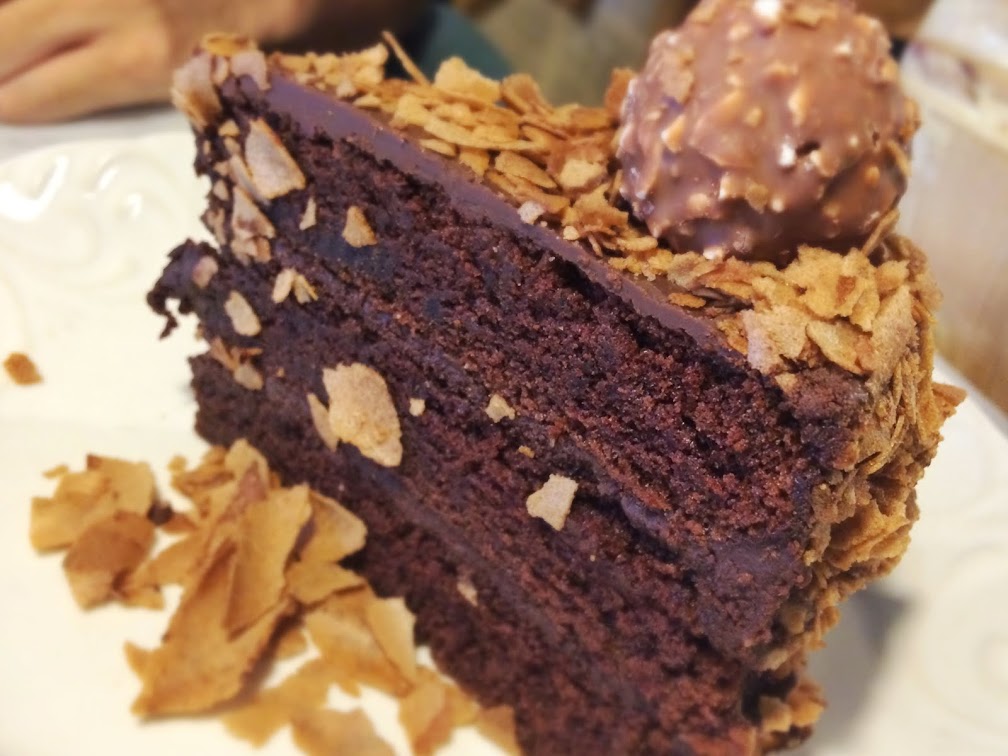 By this time, we decided it was time to head back to the hotel to freshen up for an evening at the movies. Yes watching an English-language movie at a movie theater in Bangkok. Now watching a movie at one of the premium movie theaters is an experience that needs to be done at least once. It's luxurious and over-the-top but at Bangkok prices, amazingly affordable!

Now remember that I had some carb allowance leftover for the day? Guess what we used it on? We visited a cake shop that was on my radar of must-visit places, Mr Jones's Orphanage. Just take a look at these plates of cakey goodness! 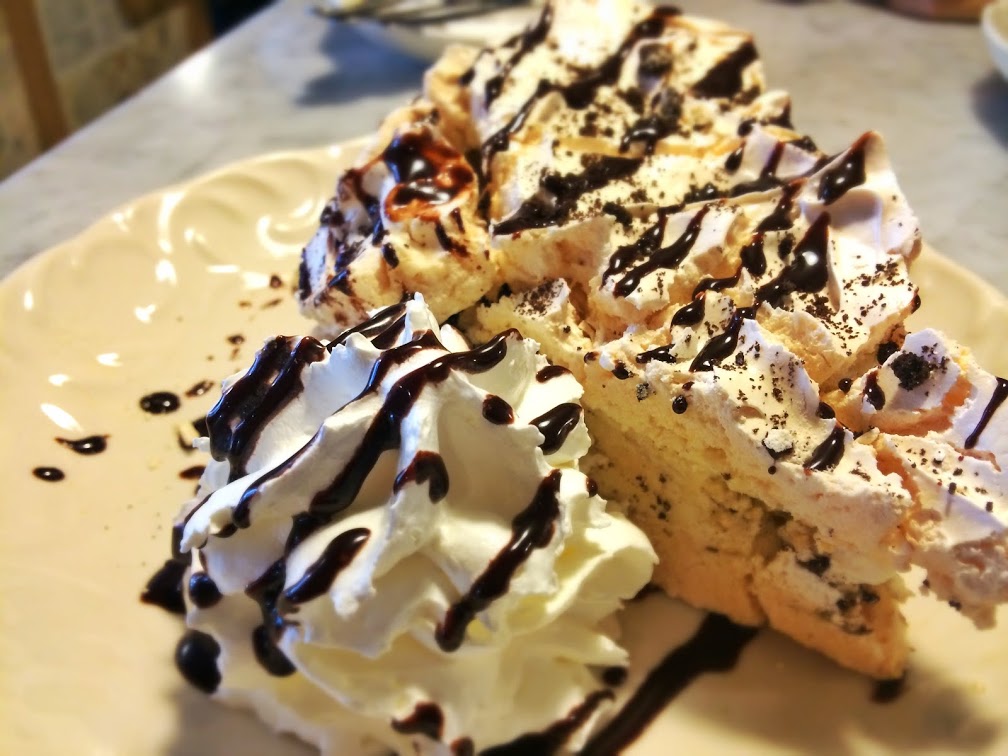 My friend had a very mediocre piece of Ferrero Rocher Chocolate Cake that really needed to be sweeter. It was almost like eating unsweetened bread with a hint of chocolate. While my Oreo Pizza was OK, it could have been better.

If you enjoyed reading this, please share or like this page. Also please feel free to subscribe to my newsletter to get regular updates and access to my new e-book coming very soon!
Posted by Unknown at 6:33 AM